Correlation between Nifty and Sector Indices

Over the last 6 months, it has been quite evident that even as the Nifty is booming higher, not all sectors are participating with it. IT which had a real good run has been on slipping quite a bit. So, the question is, what sectors are driving the current rally. As you can see in the correlation matrix below, the best performance has come in from Services sector and the Finance Sector. While IT leads the laggards, Media sector too has not had a great run.

The best way to use this sector matrix is to compare how the sectors behaved during a bull run and how they performed during a bear phase and then use the same to allocate accordingly. Lets for a start see the correlation between the same sectors and Nifty when shit hit the fan and markets slumped down during 2008

The surprise for me was the low correlation of Small Cap with Nifty. This despite the fact that taken on just values, small cap fell more than what Nifty did. But as my good friend, @Jace48 tells me, its the order that is important rather than the overall change and hence the low correlation. To test this a bit further, I created a 20 day running correlation between the same (same set of dates) and the chart below points out to how the indices did not trend in a similar way. 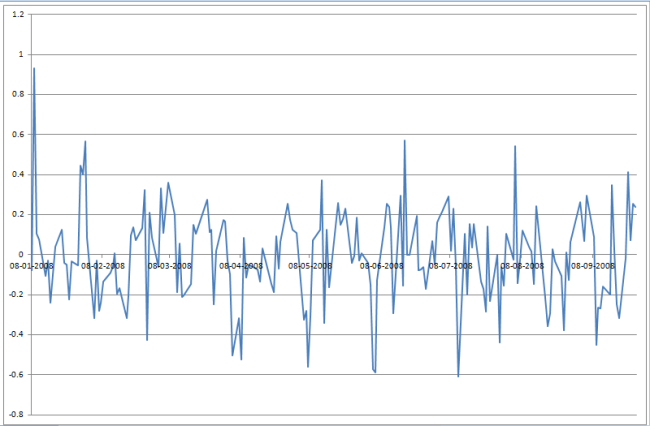 While I was working on ways to present the data I had compiled, the above presentation was based on a article I found on bespokeinvest

Have been a full time participant in the stock markets since 1996. Run a Yahoo Group where focus is exclusively on discussions of the Indian Markets using Technical Analysis as the tool (groups.yahoo.com/group/technical-investor)
View all posts by Prashanth →
This entry was posted in Uncategorized and tagged Correlation, nifty, Sectors. Bookmark the permalink.