The Techno-Funda way of Investing

For long, a concept that has gained some amount of acceptance is that by selecting stocks using a combination of Technical Analysis and Fundamental Analysis, one might be able to get much better returns compared to using either of them on a standalone basis.

I myself long back believed in such a thing to the extent that I even created a new yahoo group where I felt we could have these kind of discussions. Since I am due to give a talk to a group of friends at a Value Investing club, I decided that rather than just claim that mixing up the two would be profitable, why not test out the theory and see the results.

For the test, I chose the current set of CNX 500 components (a total of around 495 stocks). I did not run and use the output from a fundamental screen such as say the “Magic Formula Investing” simply due to non availability of the stocks that would have got chosen in 2000 (Start of Test).

I used 3 different scenario’s. In Scenario 1, I just bought 1 share each of all the companies whenever I got a signal. If that trade went into a loss (max loss of 20% from purchase price), it did not alter my position size which was kept the same for the next trade as well. Maximum Capital I envisaged that would be required, 200K.

In Scenario 2, I bought the max quantity that would be allowed based on a initial capital of 10K for each stock. If the stock had a loss trade, the next trade would have a lower quantity based on the capital left in that stocks’ account. Only Max stop of 20% from the purchase price was used.

In Scenario 3, I bought the max quantity that would be allowed based on a initial capital of 10K for each stock. If the stock had a loss trade, the next trade would have a lower quantity based on the capital left in that stocks’ account. Along with max stop loss, I also used a trailing stop of 20% from the high point it had reached.

Buy & Hold was simply buying on the first trading day and selling on the last. 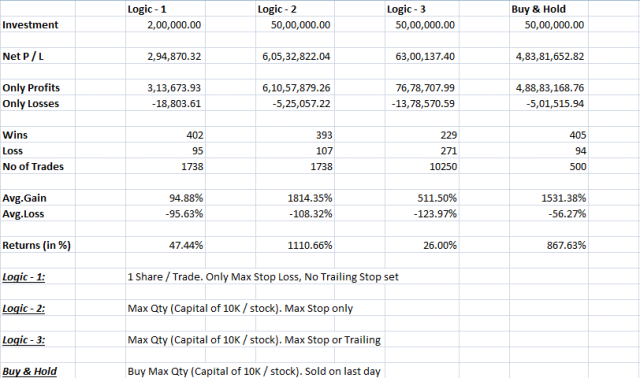 As can be seen, Scenario 2 / Logic 2 was the best performer. Of course, the results have to be taken with a fist of salt since the stocks I used for this test were those that had survived and are currently part of the CNX 500. But since the whole test is to compare B&H vs using Technical’s, I feel that the same can be safely ignored.

What surprised me was the huge difference between the system that used Trailing stop and one that did not. I am not a strong believer of using stops since market volatility can easily take the best placed stops out, but this result was a revelation as to the damage it can create in long term. Then again, its not only psychologically tough but also makes one look stupid as well to buy a stock at 100, see it move to 1000 before getting stopped out at 80. Maybe, one needs to look at a middle path, something I hope to explore in a future blog post of mine.

Have been a full time participant in the stock markets since 1996. Run a Yahoo Group where focus is exclusively on discussions of the Indian Markets using Technical Analysis as the tool (groups.yahoo.com/group/technical-investor)
View all posts by Prashanth →
This entry was posted in Uncategorized and tagged Fundamentals, Technicals, Techno-Funda, Testing. Bookmark the permalink.

9 Responses to The Techno-Funda way of Investing